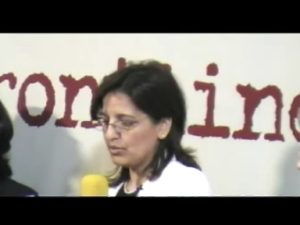 The Role of Women in Creating a Culture of Peace

Good afternoon.  Thank you for inviting me to share a few words to mark the International Women’s Day, recognizing the crucial role that women have in nurturing and guiding future leaders

Throughout history, walls have been raised between peoples, such as the Berlin Wall and the separation barrier in Israel; but the most entrenched walls are those that exist within people themselves.  Once people begin to view different groups as “the other”, divisions occur where one puts one’s interests above the interests of the other party.  These divisions are more deeply rooted and more difficult to pull down than any physical barrier.  The unavoidable result is a destructive and imbalanced relationship of violence and retribution, intolerance and resentment, whether between different individuals, races, religions or nations.

Women in particular are uniquely equipped to move beyond these internal barriers of self-interest. Women have the unique qualities of empathy, forgiveness and unconditional love, such as that shown by a mother for her child, which are essential for fostering peace, whether in the family, the greater society, or even the world.  The finest minds have always understood the peacemaking role of women.

The value of volunteerism and character education is a central aspect of education. In spite of the centuries of rule by brute force, we can observe the instrumental role historically played by individual women in laying the foundations for peace.

It has become more and more apparent through the years of peace building, discussions, and networking that peace is not only NOT attainable without the involvement of women, but that in that process, “women have significantly contributed to redefining the concept of peace and how leadership must be exercised in pursuit of that goal”.  We women will, and need, to become a cornerstone for strengthening co-operation and partnership between others.

In order to strive for world peace it must be achieved through true love based on motherly love.  We must encourage the women leaders to end conflict around the world; we know the oppression and discrimination which women in history faced and are facing.  However, now they are able to discard this historic suffering because ‘the time of women has come.’

As women, we share a common heart and common experience because we are daughters, sisters, wives, and mothers.  We share the same joys and we share the same heartaches. This shared and common heart allows us to connect deeply with one another, and urges us to live for the greater good.  Even though this is my first time to listen to Roya and the other distinguished ladies on the panel, I feel close to the women here.  There is much that I can learn from the Iranian women.  The tradition of filial piety and continual care of children, runs deep in the Iranian culture and stands as an example for women throughout the world

The general consensus is that now, more than ever, with humankind having reached a crossroad between destruction and development, the transformative and educational mechanisms in a healthy family are the best paradigm for peace-building and for fostering human dignity.  The recommendation is that women receive access to tools and resources for leadership towards a culture of peace and development.

As Kofi Annan once stated,

“Without more equal input from women we can never hope to achieve our goals”.

Coalition between women is essential.  We must unite for the common good and put our differences aside.