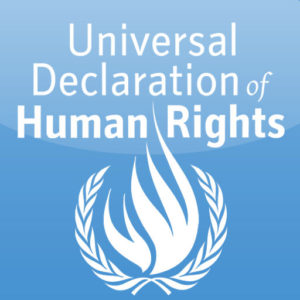 As the world celebrates Human Rights Day on December 10, and world over human rights defenders are celebrated and honoured, in Iran they are arrested, detained, tortured, imprisoned and given long custodial terms.

The protection and promotion of human rights has become nothing but a mockery in Iran. International obligations and commitments are ignored. Even Islamic human rights, which disregards the universality of equality of rights, is not observed. The Islamic Republic’s own internal laws are not observed. There are no regards to the fact that political, economic or cultural differences are unacceptable excuses for justifying violation of rights according to the religious ideology of the governing hierarchy.

On this 61st anniversary of the Universal Declaration of Human Rights, as the world is invited to reaffirm its respect for universal human rights and fundamental freedoms without distinction as to race, sex, language or religion, members of Iran’s ethnic groups await death in solitary confinement, and women’s rights activists are arrested and tortured and imprisoned.

Never in its thirty year history has the Islamic Republic’s failings in the observation of human rights been as evident as today; 339 people have been executed including minors since March 2009;  one-third of  executions happening between August and   September; over 4000 people were arrested following the June presidential elections; reports of disappearances, mass burials in unmarked graves, torture, rape and other degrading and inhuman treatments have been confirmed by human rights defenders in Iran, themselves paying a high price for their bravery and courage in speaking out.

On this anniversary of the Universal Declaration of Human Rights, ACI salutes the bravery and courage of all those advocating democracy, peace and freedom in Iran and calls once again on the United Nations and the international community to act according to their international obligations, to offer protection and demand justice for all whose rights are systematically violated in Iran.